The other day I had one of those moments in the grocery store where I stared blankly at the produce shelves thinking, “Why did

I not plan what I’m going to make dinner next week before coming into the store?”  Because that’s the thing, if I don’t go in with a game plan, I come out with 17 random things that can’t possibly be put together into a sensible/edible meal.  Then I had a small epiphany right there next to the bananas, realizing that a favorite and easy meal favorite of mine are vegetables sautéed with some kind of grain.  I knew I had something in the barley/risotto/rice family at home, so I bought two vegetables that I thought would make a yummy meal: leeks and mushrooms.  I’ve met a lot of people who have a lifelong aversion to mushrooms.  I plead with you — give them another shot!  They are tender, filling, flavorful and they make so many dishes really tasty.  If you aren’t familiar with leeks, they look like scallions that have been roid raging.  They similarly have an oniony flavor, although not an overpowering one.  When I got home, I decided the leeks and mushrooms would be best with farro, an “ancient” Roman grain — props to my Italian ancestors for cultivating this wonderful food.  Yes, this is a vegetarian recipe, but the hearty farro and mushrooms easily make it a main dish.  Hope you enjoy it!

Put the vegetable broth and farro into a small saucepan and bring to a boil.  Reduce to a simmer and cover.  Cook for about 20 minutes or until the grain is tender and the liquid is almost all absorbed.  Remove from heat.  Meanwhile, slice leeks crosswise into ⅛ inch slices. Rinse in a colander (leeks grow in sandy dirt and often bring the outside in with them when they are harvested).  Clean the mushrooms by wiping them gently with a dampened paper towel.  Cut mushrooms into ½ in pieces.  On medium heat, melt butter and olive oil together in a large saucepan or dutch oven.  Just as the butter starts to become golden and bubbly, add the leeks and mushrooms.  Add the salt.  Stir to coat with the butter and oil and stir every few minutes until the vegetables are tender. Mix the vegetables with the cooked farro, and serve warm. 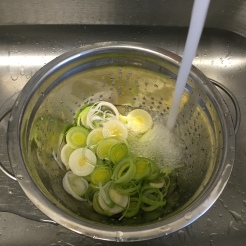 2 thoughts on “Recipe: Farro with Sautéed Leeks and Mushrooms”