Fish is one of my favorite foods.  I like eating other kinds of meat, but am picky about having lean cuts.  With fish, I never have to worry about cutting off slabs of fat.  Fish is also a great source of protein without a lot of saturated fat like cheese, red meat and poultry have.  You’ve probably also heard that many fish are rich in omega-3 fatty acids, which sort of sounds like a bad, gross thing but is actually good for your brain.  You may have also heard that some seafood is high in mercury. This is unfortunately true.  According to the Natural Resources Defense Council, “Mercury is emitted to 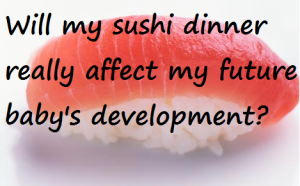 the air by power plants, cement plants, certain chemical manufacturers and other industrial facilities. In addition, over the years, many companies have used mercury to manufacture a range of products including thermometers, thermostats and automotive light switches. These products can release mercury, particularly at the end of their useful life during waste handling and disposal. Mercury pollution released into the environment becomes a serious threat when it settles into oceans and waterways, where it builds up in fish that we eat. Children and women of childbearing age are most at risk…. During the first several years of life, a child’s brain is still developing and rapidly absorbing nutrients. Even in low doses, mercury may affect a child’s development, delaying walking and talking, shortening attention span and causing learning disabilities. Less frequent, high dose prenatal and infant exposures to mercury can cause mental retardation, cerebral palsy, deafness and blindness.  In adults, mercury poisoning can adversely affect fertility and blood pressure regulation and can cause memory loss, tremors, vision loss and numbness of the fingers and toes. “

So what’s a girl to do when she wants to eat fish but also plan for a healthy pregnancy in the future?!  Luckily there is lots of delicious seafood that does not pose a risk in terms of mercury ingestion (like salmon, flounder, crab, shrimp, and canned light tuna).  It might take a few minutes of research before you dig in to your dinner, but it seems a good rule of thumb to avoid foods high in mercury if having a getting pregnant in the near future is a possibility.  Even if you’re not pregnant now, chemicals can stay in your body long after exposure.

I often find myself wanting to order fish when I’m out at a restaurant, but it’s hard to remember off hand which ones to avoid.  I got into the habit of referencing a guide that I bookmarked on my phone.  When I come across an unfamiliar fish on a menu, I can discreetly pull out my phone and quickly access the list without having to type and search.  Though there are several websites that list mercury levels in different kinds of fish, I’ve found the Eat Fish, Choose Wisely brochure produced by the NYC government to be the most helpful because it directly notes how often it’s safe to eat specific fish, ranging from several times a week to never.

It’s definitely a sacrifice to give up tuna, my favorite thing on a sushi menu.  Perhaps in my golden years I’ll treat myself to it once in a while.  But for now, I would rather know that I’m doing the best thing for my body and any future Hilary Jr.